2021: I have had the pleasure playing music in Austin with "Guitar Grady", a New Orleans and Rockabilly style rock n roll band featuring Grady Pinkerton on guitar. My time spent during the last few months of isolation learning and recording with the iPad GarageBand digital workstation.

2013-2020: I I played bass with "Tom Gillam and the Kosmic Messengers" based in Austin, TX and 2019 will see the release of our our EP "Familiar Noise". featuring "Lonely Too Long" and "Road to Cheyenne". This, following up our 2016 album release of "Beautiful Dream" featuring "Flying Blind". David Spencer on guitars and Ian Bailey on drums round out the lineup of this original rocking band.

In the Summer of 2015 Dennis Herrera Blues Band from Los Angeles, released a full length album of Herrera's songs. I am proud to have been asked to play bass on two tracks. The CD is titled "Livin' Life, Not Worryin'" and I play on "This Aint Nothin' New" featuring Anson Funderburgh and Dennis on guitars and a funky Dennis Herrera song titled "Sun is Shining".

Rare Recording: EP titled "JAMEY SIMMS". Producer Jamey Simms on guitar and vocals, Hunt Sales on drums and Dan McCann on bass . This music is hard and fast and to the groove. Recorded at OHM Studios in Austin in 2011. Dan McCann Executive Producer.

This website www.danmccannmusic.com  is good places to listen to my music and some of the music projects and albums I have played on. Listen free and without a password.

Some History:
In 1979, I played bass, wrote music and sang a little in Wildebeest, a rock band that played San Francisco bay area night clubs and recorded an EP produced by Jerry Garcia Band bassist, the late, John Kahn.

In the early 1980's, I moved to Austin with a roots band named The Fur Trappers with Wiley Cousins and Andrew Teekell, where we met and worked with Champ Hood. I joined Evan Johns and The H Bombs and for years we toured The US, Canada and Europe with Jungle Records and Rykodisc Records. I played on Evan Johns records and CD's with , Marcia Ball, Mike Buck, Henry Vestine (Canned Heat original guitarist), Jim Starboard, Mark Korpi, Jimmy Carl Black (drummer for Frank Zappa and the Mothers). I recorded original material with Bobby Keys, Eddie Shaver, David Holt, Jessie Taylor, Barry McBride (the Plugs), Fur Dixon and Frosty Smith and recorded at Arlyn Studio with Stewart Sullivan in Austin. I play guitar and bass on Virus 100 Anthology CD released by Jello Biafra's Alternative Tentacles.

In the early 1992, I moved to Aspen CO and recorded and gigged with Steve Skinner, Scott Shifflett and Flying Dog Records. The CD's are: "Unity" by The Love Machine. WAKABAK, and in 1996 Interruptus recorded "Umbrella Man" performed at the Wheeler Opera House in Aspen written by Steve Skinner..

Moving to Los Angeles in the late 1990s where I worked in bands with Ron Johnson, Blue Baron (Broken Radio CD), Joe Romersa , Dylan Thomas and Dennis Herrera. Recorded "Cottonmouth" CD with LA hard rockers "Sloth" in 1997. In 1999 I traveled to London to work with super guitarist Gwyn Ashton but couldn't get the right visa to stay there. I played bass on Honey Davis CD" Prince of the Blues" in 2005.

Austin, TX has been my home since 2010 and I lived in Austin for most of the 1980's as well. My Facebook page and my Dan McCann Music page on Facebook is where to see what I'm doing this time around in the Capital City of Texas.

I am a band member first and foremost. I have played bass since I was 11 years old. In 1974, I received a full football scholarship to Stanford University from North Hollywood High School in Los Angeles. I was the starting center for Stanford Football for Coach Bill Walsh, graduating in 1978. 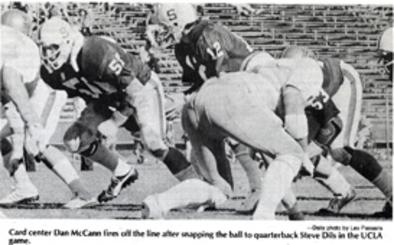 The face and voice of American music is always changing.

I live in South Austin, Texas and I am a bassist. Former bass player with rockabilly music legend and wild guitar player Evan Johns & the H-Bombs